Andrew Hearne – Lighting it up down south! (Day two)

So far I really liked it here. We were in a good place.

This was the day when Chris decided to chill out around camp and muck about with his bow. So while he was doing this, Jack, Jeremy and I headed off upstream together.

The day started off overcast, and ended up remaining that way. Not that it mattered.

There are plenty of fish in the river. Finding them wasn’t an issue. However, we struggled to catch any for a while on the second day. Jeremy decided to wait back at a section of the river where there is a lot of still water. He told us to go ahead and he’d catch up later.

Jack and I continued on our way, and finally after much frustration, Jack fished to one which was rising at the top of a long, glassy run, and it took his dry. 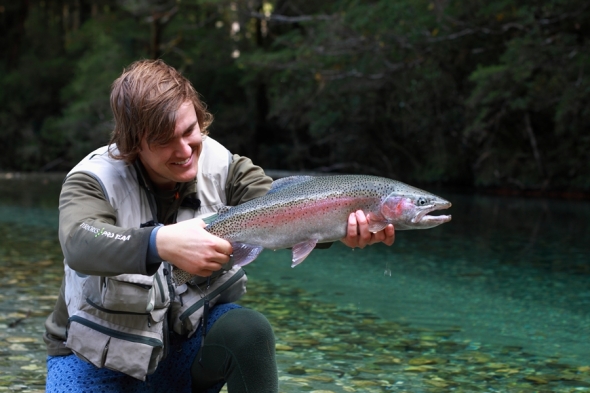 Soon after that it was my turn to bring one to the net.

It was Jacks turn once again, and it seemed like we had found our rhythm at last. 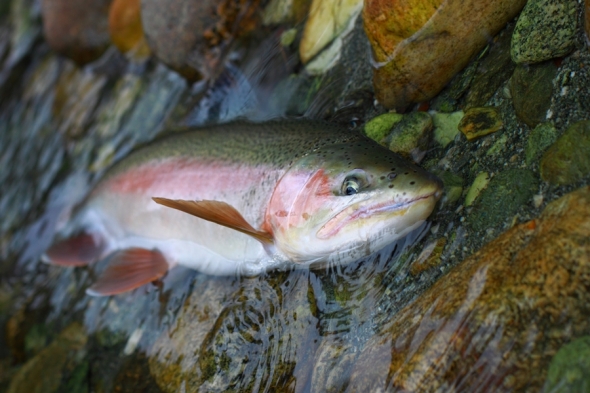 We spent the next couple of hours taking turns picking fish off one after the other. It was pretty good fishing. 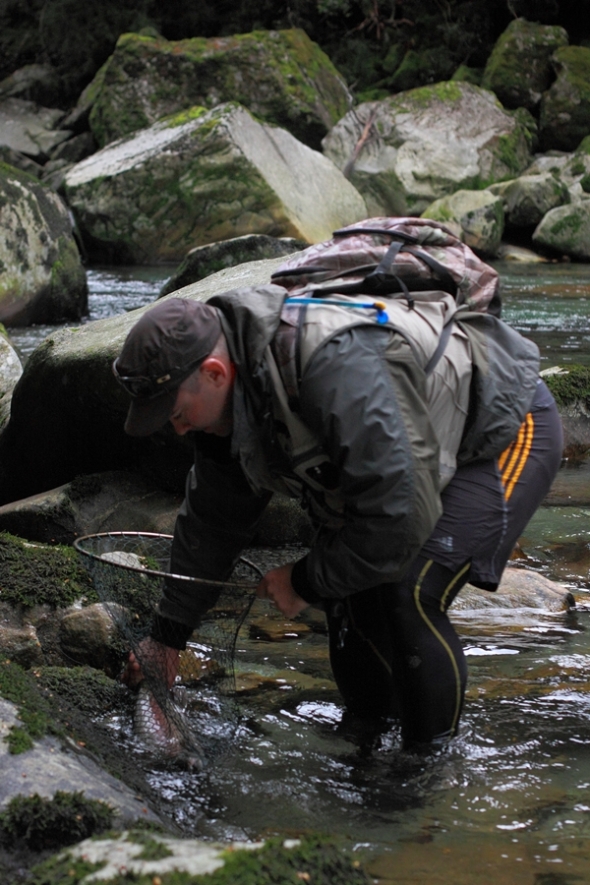 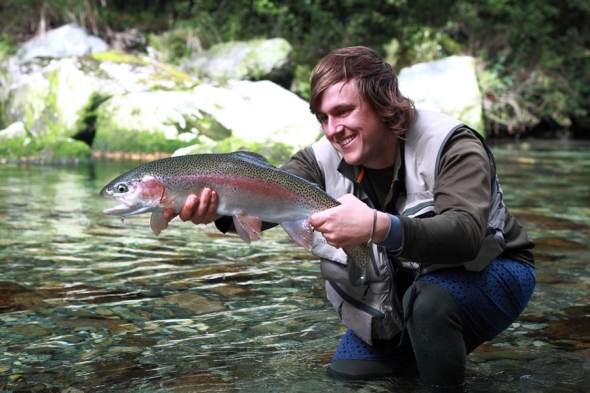 Later on Jeremy caught up with us. He’d had a pretty good time of things downstream too.

Things went pretty quiet for a bit once we reunited with Jeremy, but after a while we made it to a stunning piece of water.

Jack kicked it off by hooking into a good fish. While he was hooked up I cast to another fish feeding in the eye. I hooked up too.

So there we were, standing only metres apart and both hooked up to a big rainbow trout each. My one burst out of the water every few seconds for the first bit, and continued to do so less frequently as it tired. Just when I thought I had the battle won, the hook popped out. I stood there, shouting. I wasn’t very pleased. Jack was still hooked up. Lucky for him, he landed his one!

As I stood there feeling sorry for myself and thinking about how unfair the world can be sometimes, I spotted another fish. At first I thought it was the one which had just thrown my hook… but it wasn’t.

I cast to the fish, and it surged forward onto the size 16 hare and copper. This one went like a rocket too. It took some beating, but this time I won. It was a fat fish, and obviously very fit. This was my biggest of the day and finished up being my biggest for the trip.

That was a pretty good way to finish up. A great fish each from the same pool.

Together we walked back along the track after that. About halfway back to camp Jeremy disappeared away from the track for another look at a piece of water he’d fished earlier in the day.

Jack and I had a look off the track a couple of times too. I managed to donate some new jewellery to one fish along the way, and hooked up on the most atrocious looking pink streamer ever to swim a New Zealand river. I really wanted to catch that last fish, just to say I’d caught something on that particular streamer. I guess I’ll just have to wait for that moment.

That night around the campfire was another good one. Although I wouldn’t recommend kids trying it at home, the fire was started in the same fashion as the night before… it’s very effective. 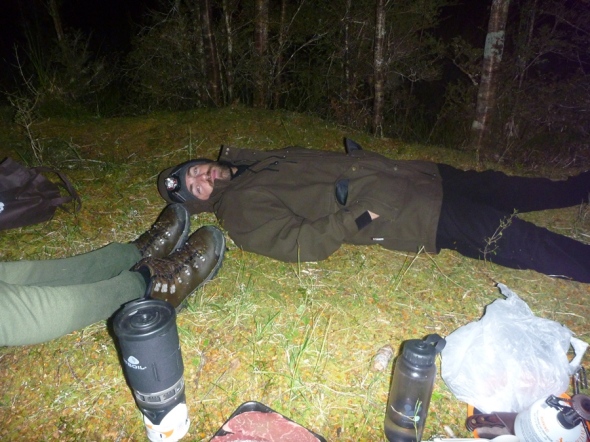 We sat on our log in front of that fire, soaking up the warmth as we fed on soup, steak, rice and veges.  This was followed up with chocolate and whisky. We weren’t really doing it tough down there.