Andrew Hearne – Always take the weather with you… we always seem too!

Last weekend Rob came down from Wellington for some fishing with Jack and I. We had the plan sorted… and then it rained. A lot!

Despite the weather, we still went fishing. It just meant we had to travel further than we wanted to, a lot further as it turned out.

It seemed appropriate that most of the pictures were taken in black and white. It matches the doom and gloom that followed us wherever we went for the three days…

The first day was spent on a river which was very high, but usually remains reasonably fishable after even very heavy rain. There wasn’t a lot of photography taking place that day though, the rain kept coming on and off throughout the day. The camera was tucked away safely for most of the time… except for when Rob caught a fish. 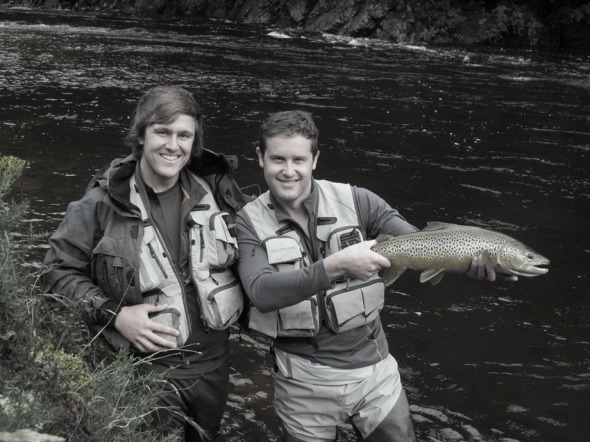 That was all for the day as far as it went for fish on the bank. They were tough to find in the conditions, but at least it was a start.

That evening we headed off in search of cleaner water. After nearly a couple of hours we eventually found some. We arranged accomodation for the night, and headed off to the pub for some sustenance by way of steak sandwiches, burgers, and beer.

That night I slept pretty well, as did the other boys I believe. I’m not so sure about our Mexican friend who was unfortunate enough to have to share the room with us that night… the snoring might possibly have been a bit much for him to handle.

The next day dawned reasonably fine, although it quickly clouded over. It seemed like whatever we did to avoid bad weather, it was going to find us anyway. It wasn’t looking flash as we headed for the river. We arrived to an empty carpark and as we started getting ready patches of blue sky began to show through the cloud cover. It looked far better than before, but we resigned ourselves to the fact the weather might change a bit during the day. 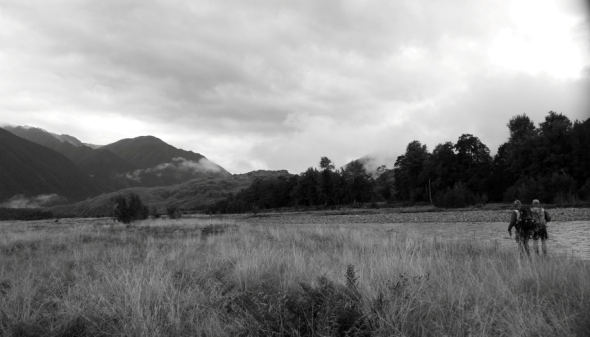 The river had a touch of colour in it, but it wasn’t really a problem. We were reasonably confident we could find fish. 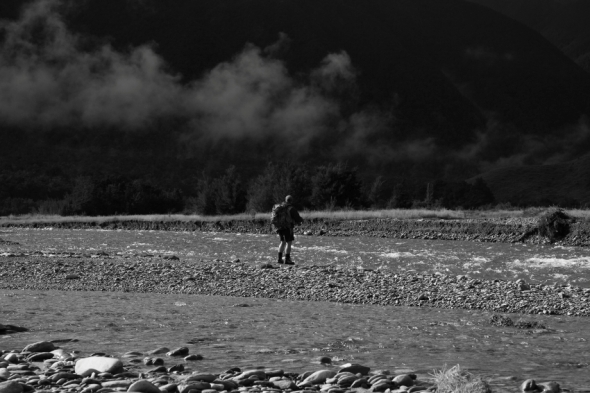 Jack found a fish, and after a couple of fly changes it took his nymph. Unfortunately it didn’t stay on for long… it spat the hook pretty quick.

Rob was next in the batting order. 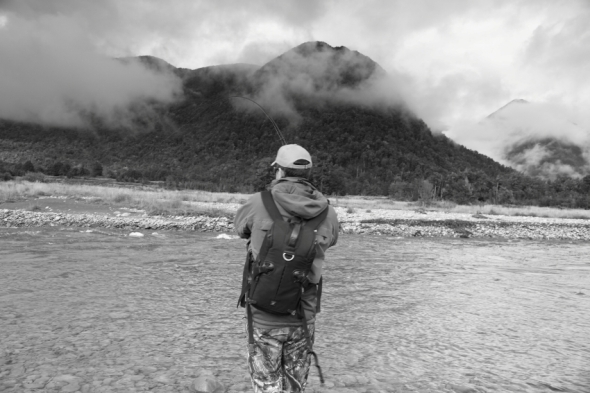 It didn’t take long for him to connect with a fish. 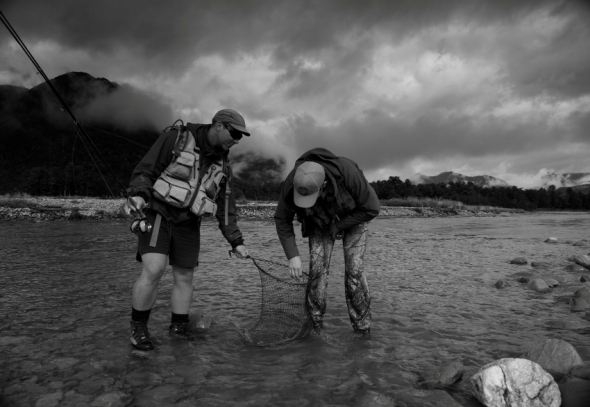 This one stayed on.

It looked like it had been on the lean cuisine diet for a wee while, but at least it was a fish caught.

After that we walked for a bit without seeing much, then I found a fish holding in a small bit of pocket water against a solid bank. I managed to put a fly in front of it and it took, but like Jack’s fish it came off pretty quickly.

At this point in the day, it was almost threatening sunshine.

Not far upstream from here we split up for a bit. Jack took one side of the river while I went on the other side with Rob. It turned out that jack was on the wrong side! 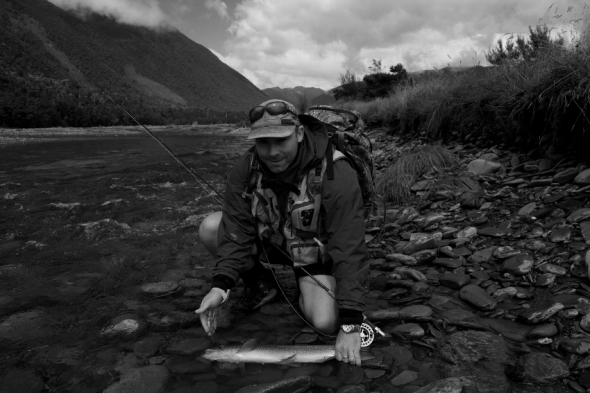 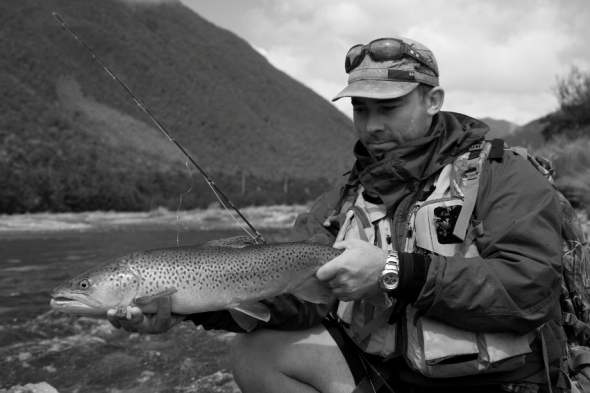 If you have a close look at my right hand, you’ll appreciate that catching this fish was a bit harder than usual. I broke my middle finger right down near the knuckle three days earlier. Casting wasn’t very much fun… but where there is a will there is definitely a way!

Soon after that we found another one which Rob fished to. It was on the move, but as soon as it saw the fly it accepted nicely.

We carried on for quite a while after that, but didn’t manage to land any more fish for the day.

It was a decent walk back to the car, but not as bad as some of our past hikes to the car. We ate and drank at the same place as the evening before, and stayed another night. The Mexican dude was gone when we arrived back, I hope he didn’t leave because of us…

The next day we opted for a smaller piece of water. For whatever reason though, the fish weren’t willing to co-operate, and we blanked. We didn’t even look like getting a fish that day, but it was a day out nontheless… 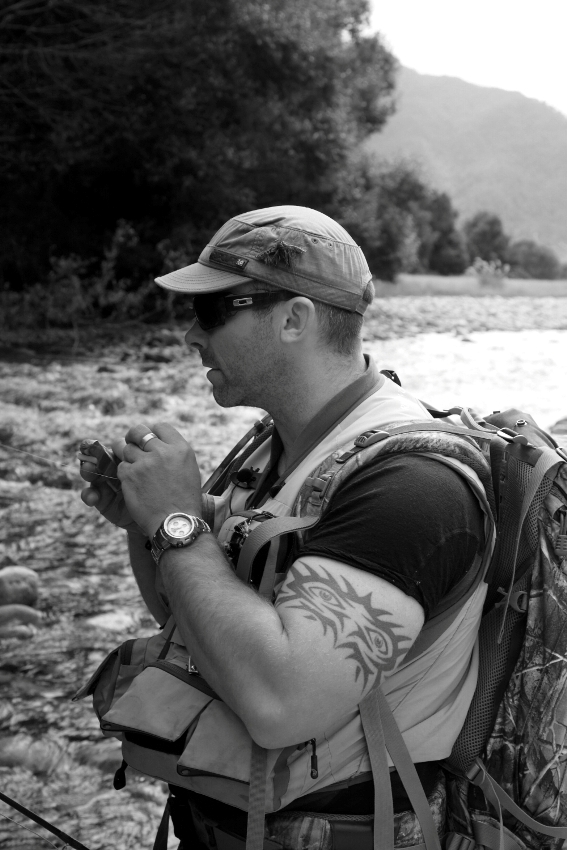 Not long after lunch we had to pack up and head back to Christchurch so Rob could make his flight back to Wellington. It’s a shame the trip was a bit of a fizzer as far as the weather and fishing went, but we still managed to have a few laughs and made the most of a crap situation. Cheers guys…