Finally a break in the weather, a chance to get out wide for some saltwater action.

The forecast looked best for Sat arvo, so a few ph calls / txt messages and a plan was hatched.  The 4 of us hooned out to an offshore reef only to be greated with a very green looking sea, a large rolling swell and little to no wind.

A few drifts and several kahawai later, Andrew hooked into the first king for the season on the jig, not a big specimen, but was awesome to get on the board.

A few drifts and a few more kahawai later I was starting to feel pretty rough, As was Jacks mate Jeremy.  We decided a few more drifts and we would head back.  Well I lost the lunch I had just thrown down on the way out, and had set up a pretty good looking burley trail, when Jack hooked up.  We knew from the get go this fish was solid, I yelled statements of encouragement for Jack, something along the lines of “Rip its face off Jack!” and “Give him death boy!”.  Finally this king got a good solid run straight into the reef, busting Jack off.  We will be back!

Poor old Jeremy was looking pretty green by this stage, so we started heading back.  Half way there I spotted some birds working, and made Andrew investigate, I quickly set up a fly rod and gave it to Jeremy with the instructions of cast as far as you can, strip as fast as you can, don’t strike like a trout, just  pull the line to set the hook.  First cast, we watched the kahawai smash the fly, trout strike = no hook up, Jeremy knew instantly why it hadn’t worked, a couple more casts and after a solid strip strike he was hooked into a good kahawai.  It didn’t go quite as hard as they normally do, but Jeremy instantly forgot about the sea sickness.

A few more drifts and after plenty of refusals, these buggers were being fussy, we decided to pull the pin.  Now a new plan was hatched, one that involved Jacks BBQ and a few Beers.  Andrews BBQ skills and Jacks vast culinary expertise resulted in this: 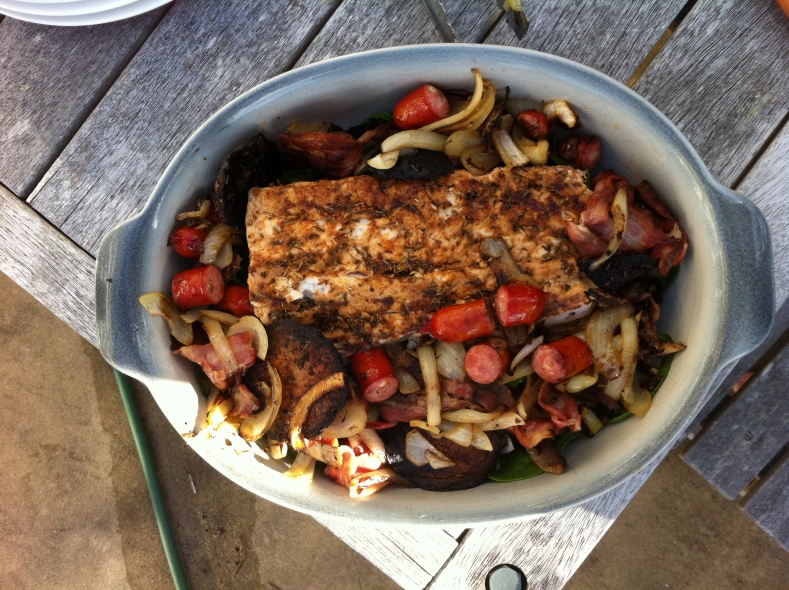 A feed fit for 4 hungry fishermen, a great end to a really good start to what will hopefully be a summer filled with fishy goodness!