Just a quick one from me. Still haven’t had a chance to get out for a fish. Spent the last few days in Melbourne. Saw Joe Bonamassa play live at the Palais Theatre – truly special. Then had an amazing dinner with Dad at Momo. Great trip. Now it’s back to reality. Couple of thousand more words to write on a Judicial Review essay, then it’s time to get cracking on studying for my Advanced Land Law exam. Joy.

Here’s a vid to remind me (and you) of happier times. We’ve got heaps of video footage from the season, so it’ll just be put up sporadically over winter.

At 4:40am on the 29th August 2007, the North branch valley of a (name suppressed) river near Lake Wanaka, New Zealand, suffered a landslide subsequently blocking the river’s path.

A wall of approximately 11million cubic meters of rock formed a dam creating a new lake 500m wide, 2 km long and 70m deep. This makes for a lake volume of around 23 million cubic meters. The location of the lake is near the source of the river affecting the several kilometers of pristine water downstream.

The river was a well known favourite fishery amongst local fly fishing guides and recreationals alike, and with the landslide the river turned from an incredibly clear freestone paradise to a silt coated suffocated and temperamental spillway remoulded by a single destructive act of God.

The fishing of course was completely wiped out for several years due to the aluvial silt and debris. The fly life dwindled unable to sustain itself with the once loose river stones now being smothered. All in all a soul destroying moment for those of us that love what the river provided once upon a time.

Well good news!… This year on one of our regular country-wide fly fishing reconnaissance missions we managed to find many (average 3-4lb) wild rainbow trout back in the damaged yet recovering river system. They were strong fighting fish happily feeding on cicadas falling from the overhanging NZ Beech trees. This was of course a great day to have but even more so a relief that the river was on track to recovery. Never (used loosely), will the river return to it’s original glory but there is hope.

Potentially, there is a risk of the dam failing and the consequent flood would again destroy the river’s progress but maybe then the silt will be washed out. On the reverse side, the dam could hold forever, who knows?

For our next study we are researching the effects of high water levels on a local drainage system near Wanaka with data from the ORC and NIWA. Very fitting after a particular river system shot up from 12 cumecs to 1020 cumecs in 1 single day… by the way a cumec is 1 cubic meter or 1 tonne of water passing over a single point per second…just imagine 1020 tonnes flowing past you every second… that’s awesome! Stay tuned for our next study.

Enter our tri-monthly competition and go into the draw to win a pair of RX2 Wading Boots. 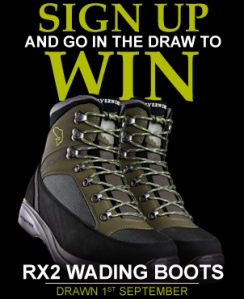 First of all, sorry it’s been so long since I’ve posted on here. A combination of heaps of uni work and barely being out fishing means I’ve gotta trawl the past for this one a bit.

A couple of months back a couple of good mates and myself hit Fiordland. Hit it hard. I’ll let the photos do the talking, but god damn it was amazing. I think an annual tradition has started.

So here goes… Cheers to Chris Dore for the photos!!

On the way down to Te Anau Chris and I hit a remote stream. It’s possible that no-one has ever fished it before. Or not.

Yep, that’s one way to start a trip.

A late night with a bizarre combination of booze, oysters and ice cream saw us packing our bags quickly in the morning. Then the trek started. What a place we arrived at!

I suppose I see why people flock to Fiordland.

First fish of the trip. Oh alright, if I have to.

That night I did something silly. I went fishing. I felt like an idiot standing on a big corner pool casting as far out as I could and slowly letting my mouse swing in the current. Until I caught this…

God it was a buzz. Love it!

Self shots at night aren’t the easiest!!

I was so stoked with the night that I could barely sleep!

The next day was an absolute blast. I lost count of the number of 5lb+ rainbows I caught.

Chris and I got a double header early on.

Dore with one of many. You’ve gotta work to get him in front of the camera!

I think Chris mentioned something about hoping I slipped and spread-legged the log. I didn’t. Instead I leapt in. It was pretty deep.

But christ, what a fish!

One of the best rainbows I’ve had.

Had to sneak a cast under a VERY low branch to get this one. Chris has the footage somewhere. Satisfying.

This is how I roll.

Once my undies were dry I headed out for another night fish. Despite my best efforts I couldn’t convince the others to join me. Their loss.

Seriously solid brownie. (and yeah, I know I look like an idiot.)

The next day I managed one of the most nuggety browns I’ve had all season. Just short and deep.

Then Jeremy early released one…

We walked back out that day. I won’t go into details of what happened that night in Queenstown. Suffice it to say that I popped my fergburger cherry, woke up with a new t-shirt and one hell of a hangover.

We’ve got some great video footage for you guys over winter, so make sure you keep checking back in!

Alex Broad – Off to Rotovegas

And this arvo Im off to Rotorua.  It was supposed to be a short break with my girlfriend and some of her mates.  Luckily for me she understands the plight of the fishing addict and has allowed me to stash a few rods and a bit of gear in the car.

I’ve heard of some awesome fish being caught by shore based anglers already this autumn, I’ll be catching up with a good mate, Lucas, and hopefully we can get into a few of these kinda fish:

Ill report back on Monday.

And the winner is…

Congratulations to Chris Rae of Queenstown, for winning the Riverworks Lifestyle Blog competition.

Your Riverworks C Series Fly Reel is on its way! 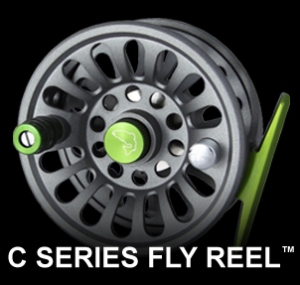 Hi everyone. I’m new here… You may have seen some pictures of me in some of Jack’s entries. My apologies.

I’ve been doing a large portion of my fishing with Jack for the past couple of seasons, and all going well we should be able to do plenty more in the coming years. We seem to get on reasonably well and are equally passionate about flyfishing. We keep each other honest.

A couple of months ago on a trip into the back country, we met with some Americans here on a fishing holiday, one of whom being the one and only Isaiah Perez. We kept in touch, and have been fishing with Isaiah couple of times since.

The most recent trip I went on with Isaiah was on 30th April, when I took him out for the last day of the main season in an attempt to get him onto one last New Zealand brownie before boarding the big bird home to Wyoming.

We couldn’t have hoped for more perfect weather. The sky was literally cloudless, and not even a hint of wind about. Hopes were high.

Isaiah Perez. Enjoying the last of the New Zealand big sky experience for 2011.

We didn’t see any fish for the first couple of hours, despite covering a lot of very nice looking water.

He’s been watching way too much Masters of the Universe.

Our lack of success saw us heading to another piece of river where I’d recently caught a few good fish. I was confident we could at least find something to fish to.

The first run that we came to on the new water soon had Isaiah behind a dark shape holding in the eye. He placed the cast perfectly and the fish moved to his fly, but when he struck the connection was brief. I saw the fish as it broke water and it looked to be a decent size. When Isaiah inspected his fly it was revealed that he was fishing without a hook, needless to say he was a touch upset.

Unfortunately we couldn’t find as many fish as we wanted to.

Later in the day we came to a part of the river where I had encountered the same fish on more than one occasion during the season, and been beaten by it every time. I sent Isaiah across to the other side to see if he could make use of the high bank and spot for me. However, he couldn’t. The light was right in his face and the water was shining silver with glare, so it was up to me to find my fish.

I went right through the main body of the run, past the places where the fish usually held. Things weren’t looking too good. However, when I got near the top I could make out a silhouette tucked against my edge which looked very likely. I’ve just been reading the latest post by Alex, in which he mentions a special fly he was given by Jack, which didn’t quite do the business for him on closing day. I believe I was using that same pattern while fishing at the dark shape ahead of me.

The first cast saw the dark shape move towards the fly, but no contact. I tossed up again and this time the fish followed the fly back. It all seemed right at that point, so I struck, and found myself connected to a decent fish.

I landed it near the tail of the run, after a tug of war and a bit of splashing on the surface thrown in for some excitement. 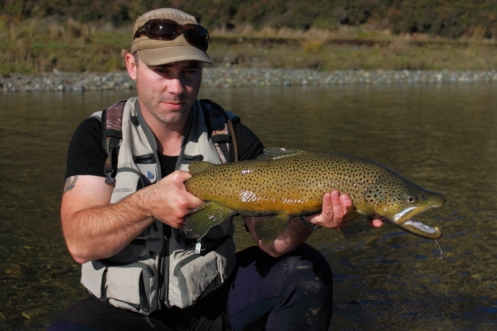 Great success – after several failed attempts during the season to capture this guy.

Sadly that was all the action we would see for that day. Isaiah had to board the big bird to the states a few days after. Fortunately for him he had already caught some good fish during his stay here, but I won’t steal Jack’s thunder. I think he might have something on the way in relation to that.